The fund seeks to contribute to the Neukom Institute's primary goal of enabling Dartmouth students and faculty to integrate computational technology into their curriculum, scholarship, and, most critically, into their thinking.

Discovering the Past Through Deep Ocean Exploration

In - Person at the Oopik Auditorium, Class of 1978 Life Sciences Center - Dartmouth College 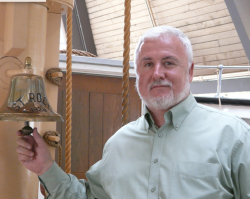 James P. Delgado, Ph.D. is a maritime archaeologist, journalist, author, and documentary television host who has spent the forty-four years in work around the world on some of history's most important shipwrecks, including ancient wrecks, the lost fleet of Mongol Emperor Kublai Khan, Arctic ships of exploration, wrecks of the California Gold Rush, the lost ships of Pearl Harbor, the atomic test fleet at Bikini Atoll, RMS Titanic, Civil War, World War I and World War II wrecks, and most recently, the ongoing excavation of  Clotilda, the last ship known to have brought captives to America to enslave them.  Author and editor of over thirty books, and over a hundred scholarly and popular articles and reports, he is the Senior Vice President of SEARCH, Inc., the flagship cultural resources company in the United States, and heads the company's exploration sector.  He previously served as Director of Maritime Heritage in the Office of National Marine Sanctuaries for the National Oceanic and Atmospheric Administration, as founding director of the maritime heritage program of the National Park Service, as President and CEO of the Institute of Nautical Archaeology, as Executive Director of the Vancouver Maritime Museum, and as  founding Historian for the Golden Gate National Recreation Area.  He served as Host for the six seasons of National Geographic's "The Sea Hunters," with best-selling author Clive Cussler, and is currently series advisor and is a frequent guest on National Geographic's series "Drain the Oceans."  He is a Fellow of the Royal Geographical Society, the Royal Canadian Geographic Society, and the Explorers Club.

There are some two million shipwrecks in the oceans, lakes and rivers of the world, and a number of them lie at great depth in the largely unexplored, uncharted global ocean.  Increasingly, technology and systematic survey is discovering these wrecks.  Drawing on five decades of experience in archaeology and the science of shipwrecks, the mechanics and the technology of this exploration and what it has revealed, we see an analog for exploration beyond the Earth, but we also see in what we find not only unknown deep sea landscapes, "aliens of the deep," and technological application in extreme environments.  We see a range of human history that reflects not only the ships, but the people and the stories associated with them.  Those human connections help make this science relevant.  The ships and their stories also offer insights into the past, human nature, and add to our understanding of history but also human nature.